The Coolest of School Field Trips 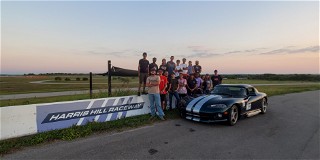 Think back to your field trips during high school. Perhaps there was a visit to the nearby zoo, city hall, or maybe the state capital. But how many of us had a field trip to a racetrack for a fantastic learning experience that involved having #funwithcars?

In September, more than a dozen students from the Automotive Technology program at Medina Valley High School in Castroville, TX, loaded into a school bus and traveled about 80 miles to Harris Hill Raceway (H2R) in San Marcos, TX. Their afternoon outing was geared toward learning more about motorsports thanks to SCCA’s Track Night in America Driven by Tire Rack (TNiA). Russell Alvarez, an instructor with the Automotive Technology program who is familiar with TNiA, reached out to event organizers beforehand to set up the visit, and was instrumental in having minor waiver forms filled out in advance.

The school’s Automotive Technology program teaches students how to repair and refinish automobiles, and service various types of vehicles. Many of the teenagers enrolled in the program already have a passion for autos, so it should come as no surprise that the TNiA visit was a giant success filled with excitement and lots of learning opportunities.

Courtney Rivers, H2R’s Chief of Operations, was on site and helped students get the most from their visit. Formerly TNiA’s Program Manager, she is well aware of all that goes into making great events happen, and was the perfect liaison to ensure these guests in their late teens got the most from their experiential adventure.

“It was really fun having the students out there,” Rivers said. “So many people don’t have an idea that motorsport is an activity that is accessible. People watch it on TV, and it looks like million-dollar cars driving around two-million-dollar racetracks. It just doesn’t look like something a normal person could be part of.”

If students had that perception, Rivers erased it immediately by getting them involved in nearly every aspect of TNiA. The teens helped with behind-the-scenes event execution, checked credentials, made sure driver helmets and belts were secure, and even rode with the safety tow vehicle.

Students chatted with drivers in the paddock while lending a hand with reading tire pressures, torquing wheels, or whatever other assistance was needed. This wandering pit crew was then rewarded for their service with ride-along touring pace laps during the event.

If it’s any indication how much fun the students were having, Rivers tried to gather the whole Automotive Technology group together for a photo at the end of their five-hour visit. That, however, proved to be an impossible endeavor as a couple of teens were helping a participant load a car onto a trailer.

“It was really cool to get these kids to see normal people getting to drive their normal cars on track, and having a great time doing it,” Rivers added. “It was fun opening up this avenue to them. By the end, several students were really interested in finding out how they could participate on track.”

The More the Merrier

“Sure, TNiA is a non-competitive, no-stress, entertaining, easy, and inexpensive way for motorsport fans to get on track with no previous experience, but it’s also a fantastic opportunity for people of all ages to learn more about getting involved at the grassroots level,” Barbry said. “TNiA events can serve as a real-life educational opportunity for those with an interest in vehicle dynamics, automotive engineering, event organization, and much more.”

The Automotive Technology students from Medina Valley High School had their eyes opened thanks to TNiA. They now know there’s an outlet for their automotive passion, and a legitimate place to play with cars.

Regional racetracks are as much a community asset as the local zoo, nature preserve, or sports stadium. Utilizing that local resource is easy thanks to SCCA Track Night in America Driven by Tire Rack. If you would like to schedule a group visit for teenagers to a future TNiA event, contact Barbry at jbarbry@scca.com.