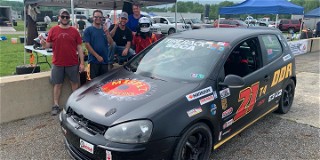 Just because you can doesn’t always mean you should. But when you consider that you can, sometimes the question becomes: Why shouldn’t you? For at least six drivers at the 2022 SCCA Enduro National Tour at Nelson Ledges on May 20-22, 2022, their on-track motorsports experience included SCCA Track Night in America Driven by Tire Rack (TNiA) and SCCA Time Trials, which meant that even though some of those six didn’t have an SCCA Competition License, they likely could race in the inaugural SCCA Enduro National Tour weekend – so they did.

Three-year SCCA member Sean Felton has been participating in Track Night events, with a few SCCA Time Trials events along the way. Then in mid-May, he hopped behind the wheel of an E3-classed race car for the SCCA Enduro National Tour.

“The jump [from Track Nights and Time Trials to endurance racing] was very intimidating for me,” Felton admits. “Aside from the ‘chaos’ of racing traffic, compared to the ‘same team’ mentality at TNiA, one big difference is the financial commitment. I've driven my daily from work to a Track Night, and then home. For enduros, a racing car is required, plus a team, replacement parts, and mechanical inclination; the team next to us at Nelson replaced their transmission – twice.”

Felton is quick to admit he wasn’t the fastest on his team during the SCCA Enduro National Tour weekend, but did his Track Night experience prepare him for the adventure? “I'm not sure anything could have prepared me for enduros,” Felton laughs. “Each time I take a stint, there's about a 40-minute period of sheer terror where I'm learning [or] remembering how to drive a track in racing traffic at speed. With that said, seat time is seat time, and anyone who knows their car and a track well enough to react quickly and safely can do an enduro.”

Felton notes that there are plenty of opportunities to learn and grow via Track Night events, should someone decide to eventually enter something like an SCCA Enduro. “Practice enough to intimately understand the racing line, the car at its limits, and how to manage simple traffic, even if it takes more than one event,” he says. “It’s equally important to build a community of people who can offer good advice, help, and occasionally lend tools or sell seat time. I wouldn't be doing an enduro without the group I've met through TNiA and Time Trials.”

A variety of events proved invaluable for Felton, with him participating in Track Nights and Time Trials. He admits others might be able to go from a Track Night straight to wheel-to-wheel competition, but for him, an intermediate step was key. “I know drivers who jumped straight into road racing without ever doing a Track Night or Time Trials event, but that wouldn't have worked for me,” he says. “I needed to turn consecutive laps to learn competitive driving, and the Time Trials format was really helpful for me. Over a weekend like the SCCA Time Trials Nationals, a driver should get about two hours of seat time, which would be about 55 laps and maybe 165 miles of dedicated practice at full speed. The only thing missing is racing traffic.”

Felton downplays his skills behind the wheel, but it’s notable that the team Felton was on during the 2022 SCCA Enduro National Tour at Nelson Ledges won their class during the first eight-hour race of the weekend, all without incident.

Should all Track Night in America or Time Trials participants consider the jump into SCCA Enduro, especially given the program’s flexible licensing process? That’s a question best left to each individual. But for Felton, whether he’s the fastest on the team or not, he’s having fun. “It's wild, but there's nothing quite like stealing an apex from a slower car,” he says.