Rental Cars on Racetracks: 1966 Was a Golden Year 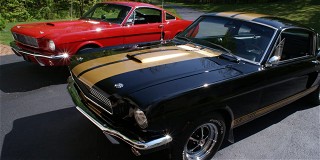 We’d never condone it, but we all know that, for one reason or another, cars from rental fleets like Hertz, Avis, and the like, periodically end up at a track day. Head to any one of SCCA Track Night in America Driven by Tire Rack’s hundreds of annual events and it’s likely that you’ll witness an unassuming econo-cruiser equipped with a slush-box trans that undoubtedly has a rental car agreement in the glovebox. Why? The reasons are many, but they often involve someone’s street car breaking or a last minute scheduling snafu that resulted in someone’s performance car being made unavailable. While putting a rental car on the track is undoubtedly a violation of the contract, it’s also nothing new. In fact, it’s a tradition that most famously dates back to the 1960s.

In a recent article, Hagerty tackles some of the most pervasive rumors regarding the famed Hertz GT350H, the so-called “Rent-a-Racer” 1966 Ford Mustang that sported not only a Hertz designation and colors, but also powerful race parts some couldn’t resist taking advantage of.

How race-prepped were these 1966 GT350H Hertz rental Ford Mustangs? The story on hagerty.com/media spells it out:

“More of an issue, even, was that the Hertz fleet soon proved subject to an unexpected artifact of the GT350’s race-inspired lineage. In order for the legitimate racing GT350 to be legal in SCCA Production racing, there had to be some quantity of identically equipped machines produced for street use in the process known as “homologation.” The race GT350 (and therefore the street version, and by extension, the rental version) used metallic brake pads intended to provide repeated fade-resistant braking from high speeds. The downside was that they were notoriously non-functional at slow speeds until they got really warm. Hertz renters soon found that upon piloting their beautiful, black and gold fastback out of the rental lot, stepping on the brake pedal for the first time made it feel like the car was going faster!”

There’s a lot more to the story, and hagerty.com/media has it all, so click the link below and read on.

Read All About It

Photo by Greg Kolasa via hagerty.com/media