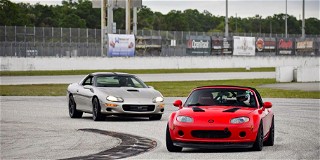 Despite a passionate effort by the motorsports community, Palm Beach International Raceway – nee Moroso Motorsports Park – waved the checkered flag on the facility on April 23, 2022.

The racecourse has long been a part of the SCCA community. Though the track opened in 1964 (when SCCA member and Sebring promotor Alec Ullman proposed moving the 12-hour race to Palm Beach, before costs shut that proposal down), it caught fire as an SCCA Pro and Club Racing venue when purchased by Dick Moroso in 1981.

With a name change to Moroso Motorsports Park, the facility hosted the SCCA Pro Racing Trans Am Series opener in 1983, as well as various SCCA Nationals and Regionals. That continued through the closing, including SCCA U.S. Majors Tour events at the track.

Beyond that, Palm Beach International Raceway will forever hold a pivotal position in SCCA history for its role in the launch of the Track Night in America Driven by Tire Rack program.

Though by nature, for both the daylight hours and the weather, many Track Night in America circuits were relegated to the summer months, PBIR was different. This facility was able to utilize the south Florida weather and the installed lights to continue the program almost every month of the year, to the tune of nearly 60 Track Night events in the first seven years of the program.

“Track Night had 59 events at PBIR, utilizing its warm nights, hot lights, and #funwithcars almost year-round,” explains Kathy Barnes, SCCA’s Experiential Programs Region Integration Specialist. “After the first season of Track Night, we went there 11 months a year. Sometimes SCCA members added a stop at PBIR to a winter vacation just to run Track Night. It may have only been Track Tours, but they wanted to participate.”

That connection brought together enthusiasts with SCCA’s Florida Region for even more fun with cars. “That consistent program year-round helped the Region connect with drivers who wanted track event programs,” Barnes explains. “We’re thankful for the memories and support they provided Track Night and all car enthusiasts.”

Though there was a last-ditch, public effort to keep the track in operation, it was not to be. Unfortunately for motorsports enthusiasts, business realities outweighed the heart.

“PBIR has been privately owned since 1964, and during that time it has hosted great racers and racing moments,” the track said in a statement. “The racing community paid tribute to the track and its history on April 23 at the Last Lap celebration, which was the final event at PBIR.

“PBIR has faced continued financial difficulties over multiple decades. Many factors, including escalating insurance costs, fewer corporate event bookings, and declining attendance, have contributed to long-term business underperformance and the conclusion that the property’s highest and best use is not as a racetrack.”

The track was a fixture of South Florida for all forms of motorsports, from drag racing to winter IndyCar testing to being instrumental in helping SCCA’s Track Night program place more than 50,000 enthusiasts on track. Whatever the facility becomes, that’s how we’ll always remember it.