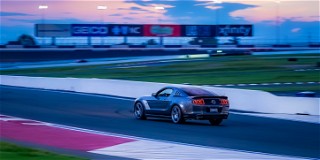 When you hear that Track Night in America is for everyone, we mean it. First time on a race track? It’s for you. Have competed at the highest level of two different professional sports? Still the same event; still for you. Why? Because it’s so much fun.

Willard grew up a car guy – his dad owned a shop and did some drag racing. Horsepower and performance are in his blood, as is competition. That’s how he ended up at the University of Clemson as a linebacker, earning an ACC championship and playing in an Orange Bowl, among other things. From there, he made a short, er, pit stop in the NFL, but it wasn’t going to be a long-lasting career there. He essentially had to ask the question that every recently graduated college student goes through - what’s next?

“Growing up, my dad was a car man,” Willard said. “He worked on everybody’s cars and had cars of his own that everybody loved. So I automatically became a car guy. It’s been a part of my entire life.

“After the NFL, I went back home to Myrtle Beach and was in law enforcement. My family has a big history in law enforcement down there. But I realized that wasn’t what I wanted to do. My family has a big passion for cars, and I just reached out, not thinking much of it, to the NASCAR racing experience and the Mario Andretti Racing School. Two days later they gave me a call and asked if I wanted to come down to Charlotte.”

He had two days to get there from Myrtle Beach to Charlotte. So he quit the job, packed up and came to Charlotte to work with the racing experience.

“On day one, a guy asked if I’d ever thought of being on a pit crew,” Willard said. “I said no, I’d never thought much about NASCAR, why would I want to do that? If anything, I want to drive!”

NASCAR crews are always looking for strong, athletic guys who understand teamwork – the pit lane is full of former football players. And the kicker – the co-worker also told him that it’s possible to make six figures “just for putting gas in the car.” Suddenly, Willard was listening.

They made him the jackman, which is the quarterback of the pit crew. Literally, everything in a stop revolves around the car being lifted into the air. Couple that with NASCAR’s Diversity program, and it was perfect timing for Willard.

But let’s be honest – getting established on pit lane fulfilled a lot of Willard’s passions. It checked the competition box, he got to remain part of a team (NASCAR pit crews train together four days a week, in addition to the weekend work), and he was making a living – but he still wanted to drive!

A natural networker, Willard was at GoPro Motorsports Plex and met Eric Waters from Trakit Motorsports. He brought him to the track later that week, where there was a Track Night in process. A conversation with a driver’s coach filled him in on the details.

“I met one of the driver instructors who said you can put your car out there,” Willard said. “I was like, ok, how much is it? He told me, and I was like, man I could’ve done that! So that was my introduction to it.”

A friend gave him a ride around the track that night but made sure he had the info he needed moving forward.

“The next time Track Night had an event, he sent it to me so I could see the schedule,” Willard said. “I signed myself up and went out there and had a blast. The good thing for me is that it was on a Thursday. I’m in town through the week, and on Friday, Saturday and Sunday I’m gone. So this works for me.”

Like the rest of us, once hooked, Willard began spreading the gospel of Track Night beginning with his first event on the Charlotte Roval.

“There are a lot of people interested in it. I’ve got some of my teammates interested, and they’re getting their cars ready to go into the next one. We’re all excited about it. Word of mouth and posting on my social media, people ask how they can get involve. I tell them to go here and here and here to get signed up.”

And the bug bit hard. He’s got a new challenge for himself and his Roush-tuned Ford Mustang.

“I’ve actually been pursuing going to different tracks. I’m in the market for a truck to tow, but I’m going to go to VIR, Carolina, and Atlanta to get to as many as I can.”