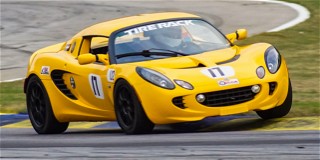 Registration is now open for one of the quickest-selling events on the Time Trials National Tour – at Michelin Raceway Road Atlanta as part of the Atlanta Region’s American Road Race of Champions, November 5-7.

There’s no wonder that it’s a quick and easy sell, though – the track is a favorite of drivers around the world.

The track’s second event – ever – was a Can-Am Championship race in September 1970. So basically, among the first people to get on track were Vic Elford, Peter Revson, Bob Bondurant, Denny Hulme, Oscar Koveleski and race-winner Tony Dean. And it has grown from there!

TrackNightInAmerica.com Editor's Note: It's been brought to our attention that the Can-Am race was the second event at the track with the first being a regional race hosted by Atlanta Region in preparation. Our informant notes that there was quite a strong A Sports Racer field at that event.

Can-Am, Trans-Am, Formula 5000, Camel GT, NASCAR, IMSA and ALMS and, of course, 24 years of the SCCA National Championship Runoffs all have found a home there.

If one were asked to describe a lap around Road Atlanta, the word most often used would likely be fast. A lap starts on the front straight, which actually is (relatively speaking) not that long. The answer, though, is that it really begins with Turn 12. When done right, Turn 12 is a fast, sweeping right hander after a long and quick run down a hill, meaning the speed that can be carried onto said front straight is significant and important for a good lap time.

From there, though, it also gets technical. A well-placed car gets the rewards after sweeping through Turn One, battling through two and three, and headed for the famous Esses. From there, once again the key is the run out of Turn Seven – because the back straight is much longer, and much quicker, than the front straight. ­­

A hard braking zone is good for passing in road racing, but less important in Time Trials, of course. But that next left-right complex will take you under the bridge and back toward Turn 12 – which, as we established, is another key to a lap time.

It’s likely done everywhere, but toss on some fresh Hawk Performance brake pads for this Tire Rack Time Trials event – and maybe carry an extra set with you, just in case.

Most importantly, however, is to respect the track. In turn, it will respect you and give you everything you need to have a fantastic drive throughout the event.

Sign up for this full weekend of track time, and competition, while there are spots still available!