Avery Towns: From Track Night To The Runoffs And Beyond 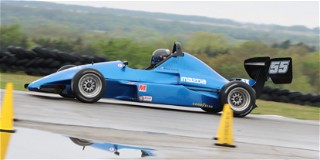 Is it possible to go from Track Night in America to the Runoffs in just a little over a year? It is if you’re ambitious like Avery Towns.

Towns, a 17-year-old student at Jesuit Dallas who grew up a self-proclaimed car guy, has parlayed skill, ambition and right-place, right-time into one of the top rides in Formula X this season. Because, as an aspiring open-wheel racer in Texas, befriending Mark and Liam Snyder and Moses Smith is an advantageous thing to do.

But hard work put him in that position. Towns began a cars and coffee type event, Cars and TURBO, in The Colony, Texas in 2019. The once-monthly car show, conveniently located at the TURBO Coffee shop, attracts quite the crowd of fellow enthusiasts each event.

A mutual friend there introduced him to the Snyders, and his good fortune – and SCCA development – continued.

“I met the Snyder twins and they let me drive one of their (street) cars,” Towns said. “I saw they drove formula cars, and I didn’t know that was a thing at the lower levels of driving. So I did the Track Night in America at MSR Cresson, and when I was there I saw the Formula Mazda garage open and decided to go over there and met Moses Smith. From there, things took off. I ended up getting into one of those and having Moses coach me.”

What a journey that began. With some sponsorship from his father, Towns raced the 2021 season in a Formula Mazda in the Formula X class. Races at MSR Cresson, MSR Houston, Hallett, Circuit of the Americas and Eagles Canyon have qualified him for this year’s Runoffs at Indianapolis.

“The first couple of times were interesting because I had never driven anything with that kind of speed,” Towns said. “Getting used to it was very, very weird. Through Moses’ coaching, I picked it up relatively quick. But I’m still learning things today. Every time on the track I find a different line that’s fast.”

Coaching from Sabré Cook, who boasts Formula One engineering internship experience and a current ride in the W Series on her resume, has helped learn the aero of the Formula Mazda along with the intricacies of racing that can come only with experience.

And that limited experience will put him on the big stage – the Runoffs, which is where he first watched Mark and Liam race (via the on-line stream, of course).

While Towns is humble enough to know just how difficult the Runoffs are to win, it’s still the first significant goal on the bucket list.

“I’d eventually like to win the Runoffs,” he said. “Being on that podium at the end of the year would be a really cool experience.”

Beyond that, however, it’s up in the air. The motorsports world is vast, and Towns and his father Cody both admit that, being new to the sport, they’re not even sure what the options are.

Two things are true, though. The first is that Towns has set pro racing as a goal, and if his early results are any indication, it’s an achievable feat. The second is that, no matter what might happen, Towns is already living one dream he didn’t know was achievable – driving a race car.