Hagerty Feature: The Importance of Cars... and Garages 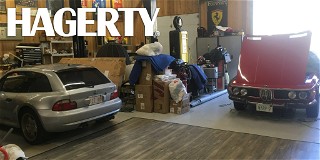 Among the many reasons our friends at Hagerty are a wonderful partner to the SCCA is that they love #FunWithCars just as much as we do – and they are a wealth of knowledge on a variety of car-related subjects. The following article originally appeared on Hagerty.com. For this and all of Hagerty’s car-related content, visit their media site here.

I’ve written quite a bit over the years in these digital pages about my space issues, how for 15 years I had a rusting, leaning, corrugated-metal, single-car garage, and how in 2005 we tore it down and had a 17 x 31-foot garage built that’s attached to the back of the house. All automotive access is through a single roll-up door, which allows easy storage of three cars and a fourth, if you put one on wheel dollies and slide it.

However, my continuing purchase of cars caused me to rent four garage spaces 50 miles away in Fitchburg, Massachusetts, where rent is cheaper. I have an additional safety valve in the form of a little-used industrial space that’s associated with my old engineering job.

Of course, garage space is like closet space and lanes on interstates—you immediately fill up what you have. When I bought “Hampton,” the 1973 BMW 2002 survivor car in the fall of 2019, and then bought back Zelda, my 1999 BMW Z3, in December 2020, I went two tokes over the line. Two winters ago, I used the engineering-job-safety-valve storage spot and put one car in the warehouse. Last winter, I stored two cars in my friend Mike’s Garage Mahal in exchange for selling his car for him on Bring a Trailer.

In the past few months, though, a confluence of four separate events made the space issues a problem that wasn’t going away.

First, I put Hampton on Bring a Trailer, but it didn’t meet its reserve. Anyone who’s gone through the BaT process knows that it’s a lengthy and time-consuming one, and to step through it and emerge at the end still owning the car but having neither the garage space nor the money upends some carefully-laid plans. I’m still wrestling with what it means and what to do next.

Second, the house in Fitchburg where I rent four bargain-priced garage spaces, just sold. My lease for the spaces is up at the end of July, and I’m waiting for the new owner to tell me if she is going to continue to rent to me at the inexpensive rate the previous owner charged me, double or triple my rent, or kick me out. In the meantime, I feel like a space-related sword of Damocles is hanging above my head.

Third, the industrial space that my old engineering job maintained was abruptly closed a few weeks ago. My automotive spider sense warned me that this might happen, which was why I didn’t put a car in there last winter, but what it means is that the safety valve is gone.

Fourth, I needed to get back the two cars—my BMW “clown shoe” (M Coupe) and 1973 E9 3.0CSi—that had been over-wintering at my friend Mike’s garage—in order to shoot the episode of The Next Big Thing With Magnus Walker. It was not only time to do this, it was long overdue, as they’d been there since Thanksgiving. But suddenly having two more cars in the driveway forced me to look the big ugly drooling space monster in the face, and the effect was dramatic. I’d previously thought that if I lost Fitchburg, I could temporarily move the four cars here until I figured out what to do, but it was immediately obvious that, even garage space notwithstanding, my driveway was now so full that I could only fit one or two more small cars, not four.

Words and Image by Rob Siegel