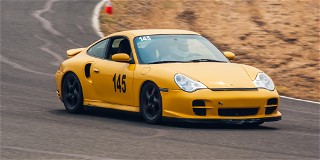 Do you have motorsports dreams? Certain races you simply must attend or activities you’d love to participate in? Or perhaps there’s a race circuit or two that are “bucket list” venues where you just have to get out on track? Dennis Howard, 66, of Maryland, has all those wishes. But instead of sitting back and dreaming about such things, he’s gone out and made them happen -- including a visit with SCCA’s Track Night in America Driven by Tire Rack.

Construction of a Car Person

Growing up near Baltimore, Dennis has been a motorhead for almost as long as he can remember. He learned how to work on his own cars, and had some fantastic vehicles on which to study.

“My very first car was a 1966 Mercury Comet Cyclone GT that I used to drag race on weekends,” Dennis said. “When I was 19, I had a ’73 Corvette.” And in-between those two classics was a ‘70 Ford Econoline “Hippie” van.

A cousin took Dennis to his first drag race, which set the hook on a lifetime of motorsports involvement. Some years later while working a summer construction job, a coworker invited Dennis to come out and watch him run one weekend at a local dragstrip. On that visit, Dennis got to talking with others and learned he could rocket his own car down the strip that very same day.

“I drove up to the line and a guy asked, ‘where’s your helmet?’” Dennis remembers. “I said I didn’t have one. But my new buddy who I’d just met, I borrowed his helmet.

“I raced against an orange Z28 Camaro … and I was in the ’66 Cyclone,“ Dennis continued. “All I remember is I moved first when the light went green. My car then filled up with smoke. When I finally started moving, that Camaro was halfway down the track.”

A nice chunk of Dennis’ free time was spent at dragstrips in the ‘70s. Jump ahead a decade and Dennis had grown to become a massive Porsche fanatic for reasons he still can’t explain today. He just liked them, and got himself a 1968 911L in the mid-‘80s. With that car, he joined a local Porsche Club of America (PCA) chapter and started autocrossing. It was at these events where he met a handful of Sports Car Club of America members who invited him out to their Solo events.

“I actually competed in a ProSolo up in Harrisburg (Pennsylvania) one time. Got my ass kicked,” Dennis joked. “I really enjoy autocross. I like the idea of driving fast, but also how fast you could go through a turn and maneuver a course. I used to do two or three autocrosses a month, and then one track event. That was my weekends.”

and Circuit Mont-Tremblant. And thanks to SCCA’s Track Night in America Driven by Tire Rack, the track fiend was able to add Thunderhill Raceway Park to his list, an experience for which he shared much praise -- high honors coming from such a storied trackster.

“I was pleasantly surprised with the Track Night guys at Thunderhill,” Dennis stated. “They made it a fun event. They always walked by and checked up on you to make sure everything was OK. They were very thorough.

“I was impressed by how they handled all the rules … and helping the new people get their act together,” the seasoned track rat continued. “I thought Track Night in America was very well run. I’d do it again in a heartbeat.”

With visits to nearly 50 different circuits under his belt, which are the favorites?

“My favorite track right now … would probably be Sonoma. It had a little bit of everything. It was just kind of a fun track. It flowed well,” says Dennis. “Before that it was Road America or Michelin Raceway Road Atlanta. I always said Bridgehampton was my favorite track. But since it’s closed down, I can’t go back and retry it again.”

Obviously, Dennis has done more fun stuff with motorsports than most of us can imagine. But drag racing, autocross and track days do not complete his story. He’s crewed for race teams at Daytona International Speedway endurance events, and even explored the adrenaline injection supplied by wheel-to-wheel racing and HillClimbs.

While most of us can only hope to be as awesome as Dennis, it’s good to have a target to shoot for. SCCA is a wonderful partner and guide for exploring this exciting world. Autocross, Time Trials, Road Racing, HillClimbs, RallyCross, Track Night in America … it’s all out there and accessible for anyone who loves having fun with cars.

Registration is currently open for Track Night in America Driven by Tire Rack events taking place around the country through May. But be quick if you want to reserve your spot at one of those events since many are filling up fast! Visit our Events Page to see what's coming up near you! And mark your calendars for April 1 when we'll be opening registration for June events.

And who knows, you might meet Dennis at a Track Night in America event. If not, you’ll meet others who share the same passion for adventure, excitement and having fun with cars.