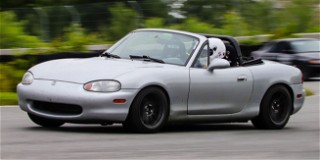 If you show up at a Track Night in America Driven by Tire Rack in the New England area, you'll likely see Jeff Gooding and his silver Miata in the paddock or on track in the Advanced Group. But he didn't start at that point. In fact, Jeff started just like most of us at Track Night – we didn’t know what we were in for, but we were certain we wanted to drive and this was the perfect place to do it.

Like so many of us, Track Night helped Jeff evolve from his first voyage in the KONI Novice Experience in a BMW 500I to where he sits now, passing Porsches in a Miata.

"Jeff has had a long love affair with cars. He can’t name all those he’s owned, but well recalls the first he rebuilt, a 1931 Buick 18 years ago. He wasn’t looking to race it, rather restore it. It became a regular at the Warwick Neck Fourth of July parade. More recently, he established a bond with a TR6."

His local paper, the Warwick Beacon, caught up with Jeff and told his story. You’ll even notice a shout out to the Mazda Motorsports team, which rewards not only wheel-to-wheel racers but track day participants, especially those at Track Night.

Track Night is a family affair for Jeff, and something he’s doing even at an age when many are considering retirement. Because what’s the fun of retiring if you can’t enjoy it?

So remember – no matter where you are, there’s a Track Night in America Driven by Tire Rack near you. Take that first step, and we’ll be there to guide you through the process.

You can do it, we promise – click here to read Jeff’s story and use it as a road map for your success!

That car is pure beauty!