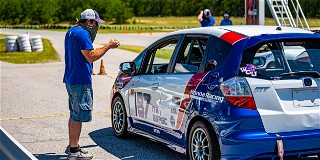 The 2020 season of the Tire Rack SCCA® Time Trials National Tour Powered by Hagerty got its long-awaited start this past weekend at Carolina Motorsports Park in Kershaw, SC. It was the third consecutive year of SCCA Time Trials action at the 2.279-mile road course and drivers joined in on the fun, making it the largest SCCA Time Trials National Tour event to date, breaking last year’s record from the same event of 98 drivers.

Unlike last year, participants were asked to follow SCCA’s COVID-19 Event Guidelines throughout the weekend, including wearing masks within the designated public spaces, which included registration, tech and other shared facilities. Despite added separation, participants maintained an air of enthusiasm, willing to put forth the extra effort in exchange for some long-awaited fun on track. “There was a real sense of camaraderie as everyone worked together on and off track to have a fun safe experience,” according to Justin Barbry, Novice Coach.

New for the 2020 SCCA Time Trials program is an event award given to the participant who does the most to champion the program and experience of Time Trials. Despite the Tour traveling to his home state in just two weeks, Bob Bailey towed his Mazda MX-5 from Texas for a chance to get back to motorsport a little sooner. Given his constant support and enthusiasm for the program, Bailey was awarded the first ever Time Trials Champion award.

The spirit of the Time Trials program has been a priority since the program’s inception. Social distancing requirements in place, Robert McDaniel didn’t want that to stop people from enjoying their weekend, so he shared his home brew at the Saturday evening dinner. For this and his focus on the fun side of events, McDaniel was the weekend’s Spirit of Time Trials award winner.

Two years ago, South Carolina Region’s Regional Executive, Shellie McKee and her husband Justin brought their 1978 Datsun 280z to compete at this event. A mechanical failure took them out of competition on day one. This year, they returned to action in the same car and made phenomenal progress through the weekend, earning them the Most Improved honors.

In the competition for Top Novice, three new-to-time trials drivers won their classes: Cody Hunt in Sport 1, Eric Ward in Sport 3 and Cody Grissom in Tuner 2. This trophy goes to the highest-placing novice in their respective classes, or the novice winner with the largest margin of victory. That honor, with a margin of victory of nearly 30 seconds, was Eric Ward.

Of the 19 classes, none had a tighter battle for the lead than Sport 2 with Patrick Daugherty and Sam Strano battling for the win in a pair of Chevrolet Camaros. Daugherty took the early lead on Saturday, but as Strano became more comfortable with the course, he came back on Sunday, claiming the faster time in both the TrackSprint and Sunday TimeAttack sessions. Strano took the win by a mere 0.026 second.

At the top of the overall standings, it was a mix of Unlimited 1 and Max 1 cars with Chris Ingle setting the early pace in his Dodge SRT Viper. He’d continue that trend, setting the fastest overall time in every segment of competition and with it, taking the Unlimited 1 victory. Right on his tail was Andy Hollis in the McLaren 720S, also taking the win in Max 1. Matt Colley and Justin Neal drove their Chevrolet Corvettes to second and third place trophies respectively in Max 1, also earning third and fourth overall. Neal was awarded the Breakthrough Performer award for his exceptional drive with fresh upgrades on his Corvette. Rounding out the top five was Christopher Bickford in a Chevrolet Camaro from Unlimited 1.