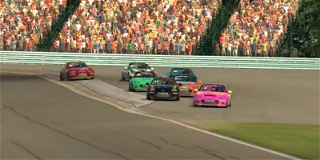 Round four of the Hoosier Racing Tire SCCA eSports Super Tour traveled to Watkins Glen International, where the evening got the green flag with a special showdown thanks to our friends at Valvoline.

The traditional full field of Hoosier eSports Super Tour competitors will land at Road America next weekend. The event continues to be open to all SCCA members, with more information available here.

Back at Watkins Glen, where five races took place on the full course:

Spec Racer Ford: James Tibor started on pole, ran with Caleb Patrie until Patrie made just one small mistake, and capitalized with a 2.042-second win on Saturday in the Spec Racer Ford race at Watkins Glen International.

Larry MacLeod fell back early in the race, trailing by more than three seconds at the halfway point, but steadily worked his way through the field to inherit second place with Patrie’s spin leaving the inner loop with four minutes to go in the 20-minute race.

Max King was in a neck and neck battle with MacLeod, but ran off track to avoid Patrie and lost just enough time through an unfortunate iRacing virtual course penalty to lose his chance to battle with MacLeod for second place and finished third. Steve Ray finished fourth, followed by Patrie, who held onto a top five after the spin.

Touring: A skilled crew of competitors again started up front in Touring 1 (T1) behind the steering wheels of Porsche Caymans. But same as last week at VIRginia International Raceway, a shemozzle in turn one at Watkins Glen International created a kaleidoscope of spinning colors and cars.

After the opening lap, DJ Alessandrini was ahead with Tom O’Gorman, Ken Houseal, Eric Kutil and Ido Waksman in tow. O’Gorman and Alessandrini fought for the lead a bit, allowing Houseal and Kutil to also get involved.

By the halfway point, Waksman fell back, and Ryan Otis filled the fifth position. With seven minutes left, Alessandrini was passed by O’Gorman for the lead. Houseal took a stab at improving his position, but lost control of his car. Kutil, on the other hand, was successful in improving his position for a bit, but gave the runner-up spot back to Alessandrini a little later. So, O’Gorman took the top T1 spot with Alessandrini second. Kutil rounded out the podium, followed by Houseal and Otis.

The Touring 2 (T2) field, working with Ford Mustang FR500S racecars, were polite at the start as everyone got through turn one. Ryan Field took the helm followed by Chip Disharoon. Paul Slavonik, Daniel Richardson and Luke McGrew were then not far behind.

Disharoon moved to the front for a moment, but a little “virtual” weirdness came into play after the Inner Loop. A spun car was sitting in the middle of the track, which caused Disharoon and Slavonik to accidently tangle and spin out of contention.

From there, Field stormed off for the victory, followed closely the entire way by Richardson. McGrew lost control and nosed into the wall halfway through the race, and Mark Shrivastava fought his way back to hold third for a bit. But when the checkered flag fell, it was Jeff Jacobs who sat third, followed by David Sanders and Dan Bullis.

Davis made his passes at the correct time, dodged a lead pack that was nine deep with five minutes to go, and earned a 0.420-second win over Max King.

Davis was second to start the final lap, trailing Reece Everard, when the field went four-wide heading toward the “bus stop.” With Everard protecting the inside and Davis down the middle, King ran through the grass and eased back on track in time to move into second place.

The best run on exit went to Davis, and with Everard spending the final lap defending the final podium position from Evan Rakusin, he crossed the stripe first ahead of King, followed by Everard, Rakusin and Jeremiah McClintock.

The lead pack also included Zachary Rivard, whose missed downshift blew an engine with five minutes to go; Ryan Maloney, whose day ended with three laps to go when he spun in the bus stop; and Andrew Whitston, who tumbled (virtually) end over end after contact on the same lap.

Those ousters as the laps wound down helped Justin Hille join the lead battle, moving around Paul Robinson on the final lap for sixth but unable to get any closer.

Big Bore: A dominant performance was delivered Saturday in GT-1 as Miles Crabbe drove his Cadillac CTS-V to the win, followed by Marc Miller in second. There was some shuffling for positions further back during the race, but in the end it was Chris DeShong who finished third, Mike Leeder fourth and Luke McGrew fifth.

The GT-2 race held some surprises for fans as Kenton Koch, leading GT-2 in his Porsche 911 Cup car, had an incident and ended up in the pits. Tom O’Gorman also had a wreck and left the race. At that point, Paul Darling inherited the lead with Caleb Patrie hounding him for many laps. But Patrie made a mistake very late in the event, which allowed Darling to scamper away to victory. Patrie gathered up his car and claimed second. Ido Waksman was third, Austin Fairfield fourth and Remy Esperance fifth.

Global MX-5 Cup: Kenton Koch used two parts speed, one-part finesse and one strong part of brute strength to give the Global MX-5 Cup field a full cup of heartburn on Saturday at Watkins Glen International, hanging on for a 0.139-second win over DJ Alessandrini.

The relative order of the six-car lead pack went out the window at the white flag and headed into the bus stop, where Koch and Alessandrini went side by side through the famously single file corner. Both drivers held their line, leaning on each other, but both also came through clean, though with Koch out front.

Alessandrini continued to look for a way around the talented pro, but Koch hit each and every one of his marks the rest of the way for the win.

Behind them, the remaining four of Michael Borden, Jack Tranter, John Allen and Aaron Jeansonne were sorting out their positions as well. Tranter was the odd man out going into the bus stop, falling to sixth and not able to catch back up.

Jeansonne, on the other hand, got a huge run going into the bus stop and was the big winner, moving from fifth to third and holding on for the final podium position. Borden finished fourth, followed by Allen and Tranter.

The Hoosier SCCA eSports Super Tour continues next week at Road America. Each run group is open to 40 SCCA members, which includes practice before the streaming qualifying and race.

More information can be found at SCCA’s eMotorsports page here.