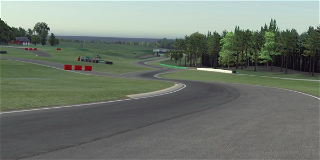 Now three weeks into the Hoosier Racing Tire SCCA eSports Super Tour, the action continues strong, and may be getting stronger. This week, competitors visited iRacing’s version of VIRginia International Raceway, a virtual universe where the oak tree continues to stand tall.

Of note, a change of venue has been announced to competitors. Next week’s rounds will visit Watkins Glen International. A full schedule and information is available here.

Spec Racer Ford: VIR tends to pinch the field in the opening corners, especially with a two-wide start. That happened in the Spec Racer Ford field on Saturday, where Larry MacLeod and Caleb Patrie had some early contact and Zachary Rivard looped his machine on the final corner of the opening lap.

That allowed Max King and Max Grau to run away from the field, with Jackson MacLeod all alone and third and unable to close the gap.

That brought the two leaders to the white flag with one to go. Grau ran wide into turn one, opening the door for King to go side by side through four corners. Grau came out in front, which turned out to be the downfall.

King used the big draft down the backstraight out of Oak Tree to take the lead, and from there held the point to the checkered flag. Grau had no answer, and King scored victory by 0.213-second.

Touring: The Touring 1 start did not go well for several drivers as many Porsche Caymans came together both before and in turn one. But polesitter DJ Alessandrini pulled away from the carnage with the lead, followed by Tom O’Gorman, Paul Darling, Ken Houseal, Evan Schickel, Ido Waksman and Tony Chow.

Five minutes into the 20-minute race, O’Gorman made a move around Alessandrini in the Snake curves for the front spot. Houseal and Darling then rounded out the leading train of four cars. Those drivers held their positions until about six minutes left in the race. At that point, Alessandrini and O’Gorman ended up side-by-side entering the Roller Coaster and made contact, both pirouetting in unison as if it was a synchronized dance contest. Houseal squeaked by with minor contact, followed by Darling.

To make things interesting a little later on the last lap, Darling and Housel went through the first couple corners door-to-door as they fought for victory. Undeterred, Houseal held on for the win with Darling behind in second. O’Gorman fought his way back to third, followed by Waksman in fourth and Schickel in fifth.

Pallotta went pretty much unchallenged the rest of the race and brought home the win, followed by Field. However, there was some good racing from the third position on back as competitors challenged one another in cars sharing similar performance traits. In the end, Herbst brought home the third-place finish, followed by Kristoff in fourth and Shrivastava fifth.

Andrew Abbott, Dylan Christie, Billy Davis, Evan Rakusin, Andrew Whitston and Max King pulled away from the rest of the field in a group of six and, with four laps to go, the already intense race shifted into high gear.

Maybe with a tiny bit of help, Abbott ran wide at the end of the back straight, elevating Rakusin to the lead and dropping Abbott off of the lead group.

One lap later, Davis and Christie were side by side at the same location, but Christie went wide in the final corner and lost his chance to battle for victory.

With two to go, Rakusin was the quickest car on the track and began to pull away, but the draft down the back straight in these cars is huge. That lead evaporated, and as they came to the white flag, the order was Rakusin, Davis, King and Whitston.

Rakusin wiggled under braking into Oak Tree and was slow exiting, making him a sitting duck down the back straight. Davis moved to the lead before the brake zone, with King following him through.

That was the opening Davis needed, holding the lead to the stripe and winning by 0.103-second over King, followed closely by Rakusin and Whitston.

Big Bore: Miles Crabbe earned the GT-1 pole Saturday in the Cadillac CTS-V field with Luke McGrew alongside. By the exit of turn one, Chris DeShong had moved to second and Mike Leeder to third, dropping McGrew back. A few laps later, McGrew mounted a charge and moved up the order, but soon found himself in fourth again.

Meanwhile, up front, Leeder slipped by DeShong and reeled in Crabbe until he could smell his virtual exhaust and challenge for the lead with about five minutes remaining in the race. But Leeder could never quite get close enough to launch a legitimate attack and ended up second to winner Crabbe.

Further back, DeShong and McGrew were embroiled in a battle for third over several trips around the circuit. Working through traffic, McGrew kept applying heavy pressure on DeShong. Undaunted, DeShong kept his cool and claimed the last podium step. McGrew took fourth and James Paulson earned a fifth-place finish.

The GT-2 race was a runaway at VIR as Tom O’Gorman started on pole in a Porsche 911 Cup car and stormed away to an uncontested victory. Behind O’Gorman, the war was hot to fill the final two podium slots.

Around eight minutes into racing, Remy Iesperance had the second spot in the GT-2 class. Caleb Patrie wanted that position a little too desperately and lost control of his car going into turn one. He clipped and spun Iesperance, but gathered up his vehicle to procure second. Jacob Besemer moved to third, and later held second for a bit after getting around Patrie. By the end of 20 minutes, Patrie and gotten back around to secure the runner-up spot. Besemer settled for third, Iesperance fourth and Ellis Spiezia fifth.

Back for even more fun at VIR Saturday was DJ Alessandrini who grabbed pole in an Audi RS 3 LMS TCR car for the GT-3 event. Andrew Pallotta joined in, too, as well as Kyle Herbst, Paul Slavonik and Dennis Barrett who together filled the top-five positions on lap one.

It was Pallotta, Alessandrini and Herbst who formed a three-car battle for the lead throughout a good portion of the GT-3 race. Unable to shake one another, the trio played a high-speed game of chess while Slavonik sat back a bit in fourth. At the halfway point, Herbst went off into the grass while mixing it up for the lead, allowing Slavonik to slot into third. Action continued for another 10 minutes until Alessandrini eventually emerged the winner in GT-3, followed by runner-up Pallotta. Slavonik cemented third, Darin Treakle fourth and Maxwell Kittleson fifth.

Global MX-5 Cup: While impatient driving caught some out early, a trio of veteran drivers worked their way to podium finishes.

DJ Alessandrini, who to date has turned into the MVP of the Hoosier eSports Super Tour, ran off to a 1.245-second win after an early battle with Club and Professional racer Selin Rollan. Alessandrini snuck away over the final half of the race and ran unchallenged to the checkered flag for victory.

Michael Borden, an iRacing veteran long before he opened the real-world 2020 season with a pair of wins at the Sebring Super Tour, snuck into the fray and then past Rollan to claim second place in the race. Rollan hung on ahead of contact throughout the rest of the field to land on the podium.

The Hoosier SCCA eSports Super Tour continues next week at Watkins Glen International. Each run group is open to 40 SCCA members, which includes practice before the streaming qualifying and race.

More information can be found at SCCA’s eMotorsports page here.