Some N-ice Winter Insurance from Hagerty 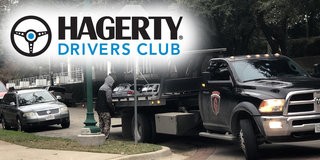 As an Arctic Blast rolled into Texas a few weeks back, I headed out to meet my father for lunch. Soon in to my five-mile drive I noticed something wasn’t right with my car. I went through the symptom checklist in my head and narrowed it down until I couldn’t deny it any more… I had a flat tire. Normally, this would just be a minor inconvenience. Like many of us, I’d changed plenty of tires on plenty of cars and feared no flats. That is, until the arctic bomb dropped.

I got the car to a safe place and got out to dig through the compartments to find all the tools I needed. As I dug through everything, the temperature dropped into the 30s as the wind gusted at over 25 mph. The jackets I’d layered were far from adequate and I’d left my gloves at home since I optimistically thought I wouldn’t be spending any time outside. My father called to check on me just as I realized I couldn’t free the jack from its compartment. “It’s fine,” I said, “I can do this if I can just get the jack freed. Do you know how it releases?” The car had belonged to my parents and I thought surely in the 10 years they’d owned it someone had changed a tire. “No,” he replied. “I’ve never changed a tire on that car before.”

By now, the temperature had dropped another five degrees and I’d lost the feeling in my fingers. “Maybe it’s time to call a tow truck,” dad suggested. My heart sank. I knew he was right, but having to swallow my pride and admit defeat to a tire with the added hassle of waiting hours for a truck to arrive felt like insult to injury.

I raised the white flag, or rather my cell phone to look up the number for a towing company when I remembered the Hagerty Drivers Club membership I’d gotten earlier this year came with Roadside Assistance. I’d already spent a lot of time with the other benefits of HDC membership like special events and Hagerty magazine, that I guess it’s fitting to get to take their Roadside Assistance for a test drive.

I talked to my Hagerty Representative, Anthony, about what happened, where I was, and what I needed. He offered to send someone to change the tire for me and since I wouldn’t wish such frigid misery on my worst enemy, we decided a tow was best. Then came the last hurdle. I don’t know about you, but I’ve never waited fewer than two hours for a truck, so I wasn’t optimistic that I’d be on my way any time soon. I asked Anthony for an estimate and he said he wouldn’t know for sure until he dispatched the truck, but their national average was under an hour. I couldn’t believe it and thought surely I wouldn’t be that lucky. Within a minute of hanging up, I had a text with a tracking link and a phone call from the driver coming to help me. He confirmed my location and said he’d arrive in 13 minutes. THIRTEEN! He arrived, loaded up the car, and no sooner had I left the scene than another Hagerty Rep called to confirm everything was going as expected and promised.

Within the hour, my car was where it needed to be to await its new tires, and I was finally at the lunch that I’d been looking forward to all week. With how easy the whole process was, I started wondering why I would ever do this any other way? Having good battle stories is nice, but so is not having to wrestle with a tire iron while racing the clock on frostbite. Getting your hands dirty is fun when it’s on your terms. With HDC Roadside Assistance, I can choose my battles.