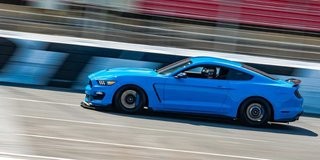 What do tens of thousands of auto enthusiasts and NASCAR Cup driver Matt DiBenedetto have in common?  Besides the love of speedy machinery, they share having attended SCCA Track Night in America Driven by Tire Rack. That is correct.  Even professional race car drivers occasionally lose the race suit to join in the fun that is the Track Night in America experience. We reached out to Matt to find out what drove him to come experience the Track Night event at Charlotte, North Carolina last year.

When asked about his decision to attend the event at Charlotte Motor Speedway last July, Matt said, “When I found out about the Track Night event at CMP, I signed up right away. We had a race coming up later in the year, and I had been looking for a way to get on track and drive the new roval layout.”  And while that was his initial reason for going, he explained how it was the atmosphere around the event that really made an impression on him.

“I wasn’t exactly sure what to expect going into the event, but I was really impressed by the feel and execution of it,” DiBenedetto said. “The event was really laid back, yet extremely well organized, and ended up being even more fun than I had imagined it would be.

“I was really glad I found out about the event, and decide to attend,” he continued. “I enjoyed it so much, I reached out to a bunch of my buddies afterwards to tell them they had to get out to one of these events, too!”

In February, driving for Leavine Family Racing , Matt led the Daytona 500 for a race high 43 laps before, unfortunately, crashing out with only 12 laps to go.  Matt, who grew up in California, knew he loved cars from a very early age, but it was after discovering the NASCAR channel that he knew what he wanted to do when he grew up. His family ended up moving to North Carolina, the heart of NASCAR country, when he was 12 years old, and he soon found himself on the fast track to becoming a professional race car driver.  Starting off in Legends, he quickly climbed the ladder up through late models and into a developmental driver role for Joe Gibbs Racing.  After running in the Xfinity Series for six years, he moved up to the Cup series with BK racing, and has been in the Cup series ever since.

We want to wish Matt good luck on the rest of his season, and can’t wait to see him out at more Track Night in America events!